Back to Barbara Van Cleve | Work 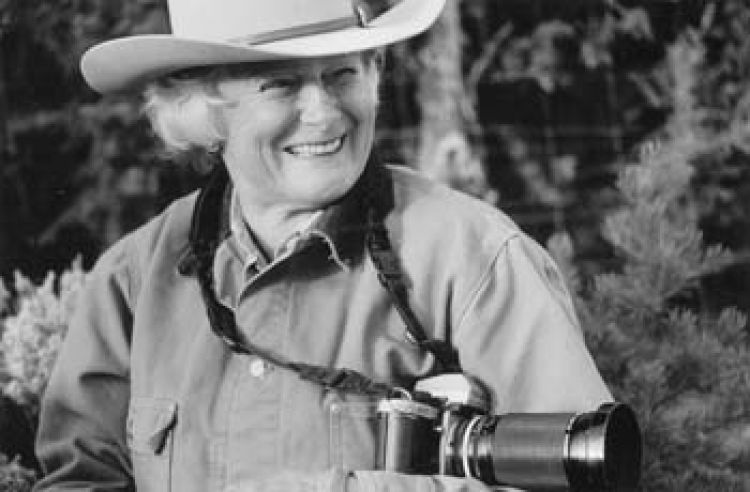 Barbara Van Cleve's heritage is rich with family history and firsthand experience. Her family's ranch, the Lazy K Bar, was founded in 1880 on the east slopes of the Crazy Mountains near Melville, Montana. Her father, Spike Van Cleve, was a unique combination of writer, poet, Harvard scholar, and expert horseman-and "a pure quill Montanan," as her father once put it.

As a photographer, she has held a camera since she was 11 years old when her parents gave her a "Brownie" camera and a home developing kit. Her youthful interest in photography soon grew into a lifelong commitment. Ranch work also began early for Barbara. Barely six, she could be found helping at the corrals or sitting astride a horse. Ever since she has been documenting the "true grit" and romantic beauty of her experiences on the ranch and on other ranches in the West.

Along the way, she earned an MA in English Literature at Northwestern University in Evanston, Illinois; she has been a Dean of Women at DePaul University in Chicago, Illinois; and she taught English Literature, and later photography, for over 25 winters at DePaul University, Loyola University and Mundelein College, all in the Chicago area. At the same time photography continued to be a passionate avocation. In her free time, she worked for Rand McNally as a textbook photographer and also established her own stock photography agency. The long summers were usually spent on the family ranch in Montana.

She moved to Santa Fe in late 1980 to concentrate on photography full time and had her first major exhibition in the fall of 1985. Since that time she has had over 30 one-person shows and has been in nearly 60 group shows. Her work is in public and private collections in the United States as well as internationally. Her photography has been published in Roughstock Sonnets, (with poetry by Paul Zarzyski), Way Out West, and Cowboys: A Horseback Heritage. KOAT-TV, an ABC affiliate in Albuquerque, New Mexico produced and aired a thirty-minute video documentary, Barbara Van Cleve: Capturing Grace, in 1993. In the Fall, 1995 her book, Hard Twist: Western Ranch Women was published by Museum of New Mexico Press, and she was inducted into the Cowgirl Museum and Hall of Fame in Fort Worth, Texas. All This Way for the Short Ride (with poet Paul Zarzyski) was published by the Museum of New Mexico Press in 1997. Her newest project is a book Holding the Reins written by Marc Talbert and illustrated with her photographs about ranch girls. It was published by Harper Collins in February 2003.

Artist statement:
"Photography has been a lifelong passion for me. I wanted to share with other people how "wonder full" ranch life was but I could not draw, or paint or make things in clay, so I begged my parents for a camera. Thankfully they gave me a Brownie Box camera when I was 11 and that was the beginning of my being able to share with others my visions of ranch life. I carried that camera everywhere and photographed everything. I still do today.
I have extended my vision beyond ranch life, although I continue to make black and white photographs of ranch life in addition to my other photographic interests. As a self-taught photographer I have always experimented in different techniques ranging from dye transfer, salted paper prints, albumen prints, Van Dyke brown prints, cyanotype prints and even tintypes.
I developed all my film and made all my gelatin silver prints for many, many years, even the very large 30" x 40" prints. Today, I have switched to digital cameras and do all my "processing" (converting the color images to black and white images) in my studio on my computers. So instead of the old darkroom I now work in a light-room at the computers. It is a new world in photography and a challenging one, but a very exciting one.
It is my pleasure to share with you some of my photographic vision. I hope that you enjoy these photographs."

Exhibitions
"Six Shooters' of the American West: Images of Life Under Western Skies"
May 28 - September 5, 2011
The Livingston Depot Museum