Back to Bruce Lauritzen | Work 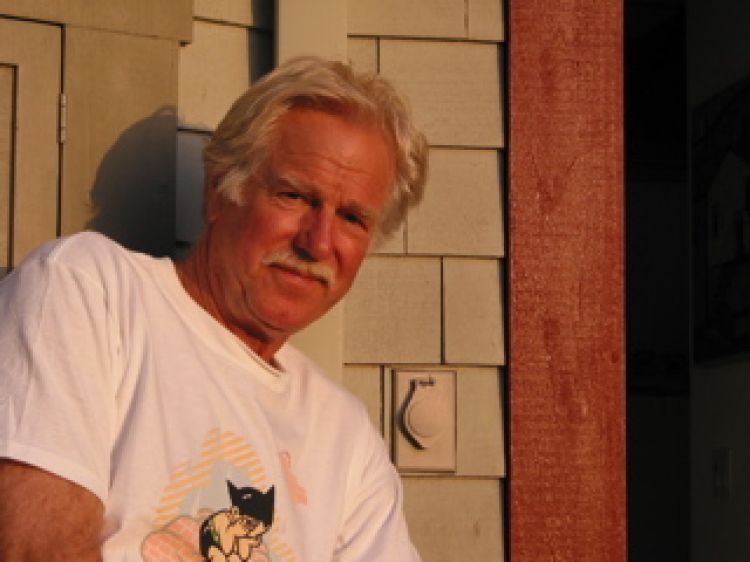 Bruce Lauritzen has been making art since he was old enough to scribble on walls. At eight years old he was introduced to adult figure drawing at the College of Marin ''barn'' under Moya del Pino, a well known figurative muralist. He attended the California College of Arts and Crafts in Oakland, Calif. He later received his MFA from the San Francisco Art Institute.

After a stint not feeling fulfilled as an art director for an advertising firm, he traveled to Europe where he discovered his love of European masters. He settled in Italy for the next six years, primarily in Milan. His first large solo exhibition there launched his career as a fine artist. Lauritzen continues to travel abroad for fun and inspiration, though he has been back in the States for many years.

After returning to the U.S., he continued to paint and show, the work gradually taking on a harder, more minimal edge, and his showings gathering momentum. Over the years he has been through many influences and approaches to his work, finding his way from representational to abstraction - much like Richard Diebenkorn, one of his strong influences. Discovering his own vocabulary has been a natural development as well as a perpetual challenge.

Art has been the lifelong passion of Lauritzen, a continuum of invention and discovery, the engine that keeps him going. In a world where painting is in question, he finds the act of pushing paint around, partly for its own sake, a rewarding experience - the notion of objective painting along with the subjective. Having been influenced in his formative years by abstract expressionism, his tendency is to be an expressionist with gesture and materials - anything that works. However, the process isn't enough. There must be a message, a concept behind his work; whether social commentary or simply acknowledging how he sees something. This can appear symbolically as metaphor or pictorially as narrative.
In his own way, like most artists, Lauritzen feels as though he is doing his small part to change the world - to influence how people observe things. That is the germ of human understanding.

Taking chances is what gives Bruce Laruitzen's work its vitality and its edge. It is the force that drives the artist onward to discover new forms of expression, however great or small. Over the years Lauritzen has tried almost everything. Presently he works with oil, acrylic, collage, and watercolor, as well as other miscellaneous media for body, texture, and drawing technique.

He tends to work in series. His recent "Western Icon" series pays tribute to objects of daily western life. He has painted series featuring Italian landscapes, series featuring watercraft, and often series of horses. With all his series, Lauritzen continues to experiment with various styles and mediums.

The horse has a special resonance for Lauritzen. It has been a powerful image and symbol throughout history - from being used as a military machine, to mail delivery, to passive transportation to sport. Man has attempted to tame the beast for his own purpose for 5,000 years. Only recently has the horse been seen as a means for pleasure and as a companion with its own intelligence. The horse exemplifies elegance and grace, and now a form of communication between man and horse is finally being respected. The horse imagery in many of Lauritzen's works comes just as much from his own natural and keen observation as it does from the inspiration of sculptors like Deborah Butterfield - whose work he greatly appreciates. He is also influenced by the work of the late Italian sculptor Mario Marini and has even found great inspiration from the scientific sequential-photo studies of Eadweard Muybridge.

Lauritzen explains the importance of horse imagery in his work, ''the horse is such a universal image, it provides me with the vehicle to play with technique and style and to push the parameters of figuration towards abstraction. I would like to think that my art, despite its many manifestations, shows an identity, a vision through the hand, while still being free to tackle any subject matter that inspires me.''

Lauritzen has had over 30 solo shows and has participated in over 60 group shows. His work is in the permanent collection of the San Francisco Museum of Modern Art and several other museums around the country. He has been featured in numerous publications, including Art in America and American Art Review.

I've spent a lifetime at the easel. Art is my passion and my nourishment. It centers me, keeps me alive. My mediums include everything from the delicacy of watercolor, to the richness of oil, to experimental, texture-laden surfaces on canvas. I insist on keeping myself open to any new concept, any new approach that occurs to me, even though I tend to paint in series, which may last for a year or a decade. "Formula" art is not for me. Every new piece is an experiment, an adventure. My subject matter may be sparked by a sudden inspiration from my immediate environment, or may creep up from a subconscious internal place. The 'Bull,' inspired by my trips to Spain, provided an emblematic and metaphoric subject, the eternal contest between man and beast. Also the 'Horse,'an icon of civilization, has been a presence in my life since I was a child. I am paying homage to both in this current show. Although I was born in San Francisco, I grew up in Marin County when it was more rural than suburban. West Marin, where I have lived now for twenty years, provides me the opportunity to thrive in fresh air, unencumbered by noise and traffic, and where, incidentally, we are surrounded by horses and bovines. Designing our home, studio, and landscaping provided our custom habitat, as well as my "sculptural" outlet. I love to smell the earth and see things grow... and keep making art. On the edge of the sea, between forest and rolling hills, what more could one ask for? (Don't tell anybody.)